The virus has made its way to 167 countries including Estonia and our Company's hometown Tartu. On Friday, March 13th Estonian government strongly suggested people who possibly can, to stay home and work from home offices. From Monday 16th, all the schools and public meetings with over five people were prohibited. This meant that people did not necessarily have many places to go or nothing particular to do in the city. The density of people in the city and its streets were expected to decrease and for our all great interest, so it went. Through eyes, the streets were almost empty and cultural institutions closed by this time also. As our SPC-s collect mobility and environmental data, it is a good moment to investigate what exactly happened last week with the density and amount of vehicles in the Pepleri’s street compared to the previous “normal” period.

This regular week, when schools were open and no crisis instructions were shared we had 38 425 cars driving over our crosswalk. From Monday to Friday there were 33 078 and on the weekend 5342 cars. So 84% of this week’s vehicles were registered on workdays and 16% on weekend.

The day with most traffic was Tuesday with 7071 cars, not far behind was Thursday with 7038 cars.

This week, a strongly suggested quarantine in Estonia was established. Moving around in the city was only allowed if really needed, so let’s take a look at the statistics and see what this brought to us and if the measures taken by the government changed people’s moving behaviour patterns.

The day with most traffic was Monday with 3844 cars.

Overall, the traffic on Pepleri’s street decreased by 42%.

The weekend difference was -8%

The decrease of 42% is a good result, but it should and could be even better.

The small decrease on weekend shows that people did not sit in their homes during the quarantine weekend. The decrease was only 8%. To achieve a good overall result in control of the virus spreading, movements during the weekend must also come down. If the city would have more SPC’s installed to the city, additionally to increased traffic safety, even better traffic analysis could have been made.

As it turns out, the traffic data SPC generates has its value in terms of giving an overview of city traffic situations and we are working hard to bring out even more and better outcomes of the data collected. 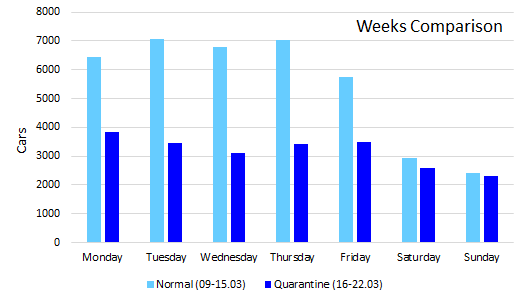